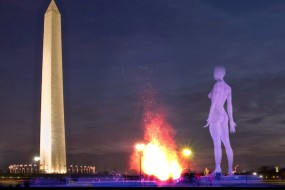 I did not plan to write today, but the death of Mike Adams has forced my hand. Will we ever know the truth of what has happened? Or is someone, even right now, in the no-news-silence, trying to figure out how to spin this thing in some way for their agenda?

The Queen is rising! It’s her time! Gaia/Eve/Power of womxn!

Towards the end of June I wrote several articles I titled: “Adam and Eve and shades of grey”. They want to “X” us out, men! And this should be a double-warning to the church!

I wrote of Black Rock Desert and the “Burning Man” event that has been going on every year since 1986! Located at Black Rock since 1998. I wrote how this Racial Movement is needed, but it is also a distraction from seeing where the real threat is coming from! We do not see the enemy of our soul, enemy of the church, slowly positioning his Queen, the woman/Eve/Gaia/ Ashtoreth to be the downfall of Adam again! We lose the garden/church again!

I wrote a prophetic poem about it, and I will repeat that here, rather than all the details you can read in the past articles. The church really needs to open her eyes and see. I highly recommend reading those articles. Ashtoreth is alive and well in our churches, and this would-be idol Queen is on the rise! (Search June articles.)

Mike Adams had the wrong political view according to some. He dared to speak his view as we all have the right to do! First he was pressured to retire early from campus, and was set to do so on August 1st, but now he is suddenly mysteriously dead? Is someone sending a message? Is this mere coincidence? Will we ever know what really happened? Here is the prophetic poem I wrote on June 30, 2020.

They feel no shame shedding their clothes.

Those who are naked and unashamed…calling good, evil…and evil, good.

But when Holy Spirit burns…

Great spiritual warfare is upon us, and perhaps greater than ever before. They actually wanted to set this naked woman statue (R-Evolution) before the Washington monument and almost succeeded! Before this great testing is over, God will know if we are a real follower of Christ, or not. I hope we’re ready.

A fist punches into a Bible. 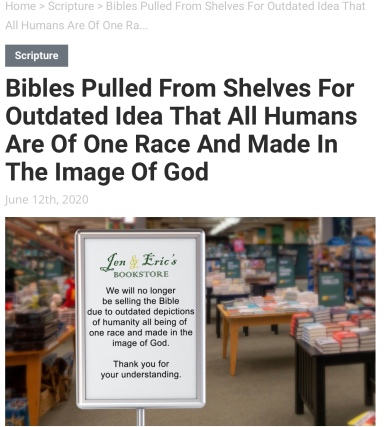 It was a prank. Right?

Someone loosened the cap? You gave it a shake?

The salt poured out all in one place?

Like a rocket from a lifting pad, so the church began…Jerusalem!

Did they not understand God’s true plan?

Salt in a lump heals no land!

But salt in a shaker?

Is it time again?

To be tossed about spending ourself; sharing our money, houses, and homes?

The pursuit of wealth, possessions, and fame! What have we gained?

Loose the gravity! Be free in Christ! And change the world!

Macro salt is a Dead Sea, a Lot’s wife, a church spewed out,

a body left behind.

Has it not always been so?

Rachel rushed home as quickly as she could. She couldn’t even get the door closed before Clara was shouting from the other room, “Mom! Did you hear what’s going on?”

Rachel could hear it blaring on the TV, and Clara was glued to the screen. “Do you think Frank is there?”

“Yes, I’m pretty sure he is. He rushed off to something right after he dropped me off.”

Rachel joined her daughter on the sofa watching the unfolding events as best the news could bring it. While she was watching safely in her warm apartment, sitting upon a soft couch, someone she loved was on the front lines of the danger. The news reporter was reminding everyone of recent events indicating a new gang was trying to muscle into someone else’s territory. The police had tried to keep a lid on this, but reports were leaking out anyway, including the murder Rachel had witnessed. It was likely connected to the new gang.

The execution had been staged for many to see. Someone even caught it on video. The executed man was high up on the food chain of the current gang. They were sending a message. Now with war breaking out in the park, the battle was escalating, and there would be no keeping a lid on it. A gang war was underway in NYC!

This had been common knowledge by the police for a while. They all knew what to expect as they prepared to enter the park. There would be guns, knives, chains, clubs, fully automatic weapons, even motorcycles to contend with. Most likely it was an arranged fight. Both gangs showed up for an all-out war!

“Mom should we pray for Frank?” Clara asked.

Of course, dear. Yes, that is a very good idea, and all the people there, both good and bad.”

Rachel and Clara were members of a large Church just a few blocks away. They started attending Church back when she was still married to her Ex, who abused her one too many times. But neither her or her daughter were deep into the word. A shallow Christianity had been enough, and the big Church specialized in that, even though neither of them realized just how shallow their faith really was.

It wasn’t their fault, they would have said. The struggle to survive, the work to provide, it all took so much time, little was left for serious prayer and study, or reaching out to others. But that was normal, right? At least it was normal where they attended, and that was all they knew. So Rachel began praying, and as she did, something tugged at her heart, because she realized her prayer felt as shallow as the kiss she gave Frank less than an hour ago. Something awakened in her soul, but she did not know what, and there wasn’t time to analyze it right now.

Clara added a few words to her mother’s prayer and then both returned to wide-eyed fixation on the TV screen.

Yinney, however, knew nothing of what was transpiring in New York City as he enjoyed his 7th Day Tree in the Amazon jungle, but he was waxing poetic, a mood that hit him from time to time, and was trying to get the words right, as every word-smithy knows, it’s not an easy task, but a labor of love, nonetheless. This poem would officially begin his book: “The Beauty of Slow”.

My greatest treasure, my soul.

What powers this body? My soul.

What holds eternity? My soul.

My soul lives in spirit.

What would profit me if I lost my soul?

My greatest treasure, my soul!!!

God’s Presence the air I breathe.

Jesus, shelter for my soul.

Jesus, completion of my soul.

Bride of the Lamb, I am.

Everyday I ask such an important question,

“What does my soul need this day?”

The flesh screams like a squeaky wheel, never leaving doubt of what it feels.

But what of my soul?