On the eighth day a rare occurrence was happening in Frank’s hospital room, even though he was unaware. Rachel, Clara, and all three of Frank’s sons were visiting him at the same time. It had not been planned, it just happened.

Over the eight day period, Rachel had met the young men one by one. They all knew of each other, but had never met. Tommy had been the last to arrive to NYC after having to take personal leave and arrange a flight. He was involved in building some road somewhere in another country. Frank had mentioned his son that he rarely saw due to his job. Rachel had not given it much thought as to exactly what he did. He was still young and wanted an adventure, Frank said. Probably not a career path for him.

The older two sons, John and Dave, had moved farther out of downtown proper, but still came to it on a regular basis. Clara, Rachel’s daughter, had met none of them until now, so you can imagine the noise level of finally having everyone together for the first time. Even Frank seemed to be there, though he wasn’t really.

As everyone began settling into a more normal flow of conversation, of course Frank became the main topic.  The sons all admitted they expected something like this to happen. New York City is just too dangerous a place. How could their dad take such high risks for so many years and not have it catch up with him? So the news had not been a surprise, but it still hurt just as much. And would they ever have a conversation with their dad again?

“I have a confession to make,” Rachel quietly said, and all other talk ceased. After a short pause to gather her thoughts, she continued. “I have been afraid to love your dad. I know I’m in love with him, but I’ve held back and been afraid to go forward because of this very thing. I just couldn’t imagine kissing him good-bye every night knowing what he was leaving to face, and wondering what might happen? How did you boys live with it?”

John, the oldest, was the first to answer, “You could say we didn’t have any choice. We just had to accept dad might not come home one day. Of course, it didn’t even occur to us till we got a little older. But we always had each other, and we were brave together.”

“Yeah,” Tommy agreed, “But mom always said she would have grey hair early, and she was starting to turn, but…well…that ended up not mattering.”

Clara tried to imagine what these boys had been through, but they had parents who loved each other. They had grown up being loved and knowing what love was about. They did not fear their dad, only the fear of what could happen to him. Perhaps by someone like her dad had been.

The conversation revolved around this topic of learning to live with the fear, for the sake of love, for a while. Then Dave said, “But someone has to do it, right? I mean, what if everyone just said it’s too dangerous, too hard, too ugly, and the darkness took over? It’s a calling, I think. Some answer the call.”

Everyone nodded in agreement, and then Clara asked, “But what about now? You know your dad better than us. How will he handle no longer being a cop? Perhaps even being confined to a wheelchair?”

“He’s gonna do just fine,” John answered. “Dad always said the ability to adapt is the number one survival skill, and dad’s a survivor.”

“Yeah, but,” Dave added, “he’s gonna need something, or someone, he can find meaning in. Dad’s always been about purpose and passion, having a mission, a vision. If he fails to find a new purpose, he will wilt on the vine like a dying flower.”

“Or maybe a rotting tomato,” John interjected. “Dad’s too rough around the edges to ever be compared to a flower,” That statement caught everyone by surprise and laughter broke lose in the room again. They all knew how true it was, and the brothers began relating stories. “Remember when…” each brother would begin. “Or what about the time he caught you, Tommy, skipping school?”

The noise level once again raised the roof when a low but deep voice was heard, “Hey… what’s all the noise about? Hold it down everybody. I got work in a few hours.”

Everyone was on there feet in an instant! The button was pushed calling for a nurse or doctor to come quickly! “Dad, can you hear us?” John yelled in his excitement.

“Yes.” Came the answer, though he did not open his eyes. “Why do you think I’m saying hold the noise down?”

Cheering erupted in the room even as a male nurse burst in. Frank couldn’t make sense out of what was going on. He just knew he was very tired. Must have been in a very deep sleep and the fog still hanging on. His alarm had not gone off yet, so he still had time, but why was everyone in his room? It just didn’t make sense and he was too tired to worry about it. He just wanted more sleep, but now someone was roughing him up! What’s going on?

“Wake up, Frank!” the male voice was insisting. “Your family is here to see you. You can’t let them down.”

None of it was making any sense. “Who is this guy? Am I being attacked?” Against his will, Frank forced open his heavy eyelids and tried to focus. Everything was a blur. He saw Tommy first. “Tommy?” Then he saw Rachel and Clara. “What are they doing in my room? And who is this ugly guy?”

It took a couple minutes, but he finally realized he was in a hospital room, and then the killer in the park and the fall all rushed back into his mind. It was actually painful as it hit him with such force. He laid his head back, raised his hand for everyone to quiet, and said, “Okay everyone…I remember now. Must be pretty bad if you’re all here. Especially you, Tommy. I guess I’m going to need some bringing up to date. How many days have I been out?”

“Eight,” Rachel answered, as she stepped forward to hold his hand.

“Wow…I never been out that long before. And I had the strangest dream. Something about a sloth.”

Everyone in the room were smiling. They were just so happy dad was back. Then he speaks of dreaming about a sloth? Once again emotions overflowed in laughter, tears, and hugs.

“Welcome back, Officer Frank,” the nurse said. “You’re still in the land of the living.” 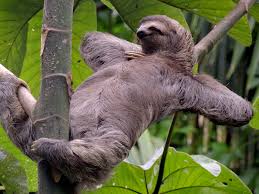