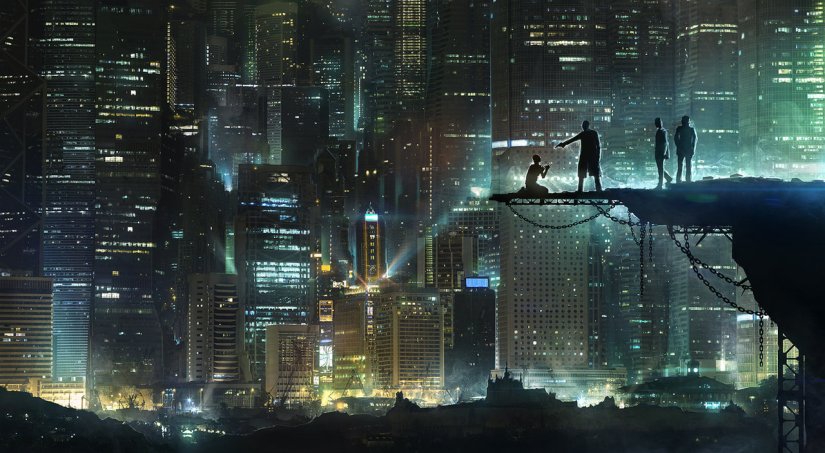 Frank had just enough time to swing by the Coffee Cafe and check on Rachel before going on duty. Actually, this cafe was part of his territory. Had it not been, they probably never would have met.

The night was wet, chilly, dark and nasty as he made his way down the tight streets. Horns blared and echoed on the concrete walls every time a red light turned green, the very second it turned green. It was a New York City tradition. The locals thought nothing of it. The glare of headlights and store lights made driving extra hazardous, but then the driving was always hazardous in the Big Apple. Vehicles passed each other with inches to spare. Bicycles darted in and out. It was crazy as usual, and normal for NYC.

Fortunately, parking was not a problem for him, a back alley spot served the purpose and he came in his usual way for his usual coffee. Of course Rachel was expecting him. He had been doing this every night she worked. Not so much in the beginning, but as their friendship grew closer, he always wanted to check on her, and she appreciated it.

Rachel was a bit gun shy about a new relationship. Her first marriage had turned into a nightmare. Alcohol was mostly to blame, but after years of abuse and unfaithfulness, she finally filed for divorce. She had one daughter named, Clara, and both of them had been through a lot together, but it had only served to draw them closer. Clara was a young teenage lady now, well able to take care of herself, and she was wise beyond her years. She did not want to repeat her mother’s mistake.

Nor did Rachel, and now with Officer Frank showing up, she wanted to be sure not to rush into anything, and Frank said he understood. She knew he had been a good husband before, in a relationship that lasted, until the cancer took Jane away. She had every reason to believe Frank was a good man. Clara liked him too. She was even allowing herself to “hope” again; something she had not done in some time.

“Hey tall dark and handsome. You here checking on my welfare again?”

“You know I am,” he quietly admitted, and then almost as an afterthought, “Oh, a black coffee would be good too,” he smiled.

Rachel already had it behind her back. Pulling it forward, he smiled again, they laughed and began quietly talking as he leaned on the counter. Things were always slow at this time, which was why she was about done with her shift and ready to head home.

After a few minutes of talking and no new customers walking in, Frank asked, “You ready?”

“I got it, Honey. Another slow two hours and I’ll be locking her up. You get on out of here.”

A subway entrance was only three blocks away. Frank gave her a ride to that entrance where he would drop her off and head to the precinct. Usually within twenty minutes Rachel was home to her small apartment where Clara greeted her. The bond between them was strong. They were survivors.

Frank stopped his car and reminded Rachel one more time, “Now remember, you got my number. Anything at all don’t look right, you call me. This is my beat. I won’t get in any trouble coming to your rescue unless I’m already involved with something. Which doesn’t usually happen until after I leave the precinct. Got It?”

“I got it, Officer Frank,” Rachel confirmed with a smile, before adding, “You know, you don’t really have to do this. I’m a big girl. I walked this three blocks many times before you came along.”

“I know I don’t. But I want too. If it’s alright with you. I look forward to the free coffee you give me.”

“Ha!” she laughed. “Now the truth comes out. Okay. You make my day, Frank. See you tomorrow.” A quick kiss and out the door she climbed. Waving bye, he watched her disappear into the subway. Saying a little prayer under his breath for her safety, he hit the gas and shot forward.

Once Rachel got off the subway, she had another four blocks to walk. No one thought anything about it in New York City. It’s just the way things were and people did it. It was a way of life. Everyone was aware of bad things that could happen, but even at that, the odds were still in your favor. Most people lived long lives in the big city without any horrendous events, but everyone kept both eyes wide open, because you just never knew. People did crazy things.

She was only one block from the subway, with three still to go, when she thought she heard a man crying, even begging for his life! The sound of his voice, the terror, immediately sent chills though her own body and soul. Quickly ducking into a dark place, she strained to control her emotions. She was afraid to go forward. Where was the sound coming from? She might walk right into it!

Her eyes widened, finally locating the sound, and she could not believe it! A man on his knees begging! High on some piece of construction. Another man with a gun pointed right at the begging man! Even two more dark figures backing him up! Their forms were silhouetted against the lights of taller buildings. A man was about to die, and there was nothing she could do!

Frantically reaching into her coat pocket and grabbing her phone, she hit the speed dial for Frank. She was in no danger.  They could not see her, nor could she identify them, but a murder was taking place and she was witnessing it! Before Frank could even answer, the shot rang out. The begging man went limp, slowly crumpled over, his form falling from the building. She heard the sick sound of a body making contact with concrete. Immediately a woman screamed, and the men above simply disappeared into the darkness. Frank answered the phone knowing something must be wrong.