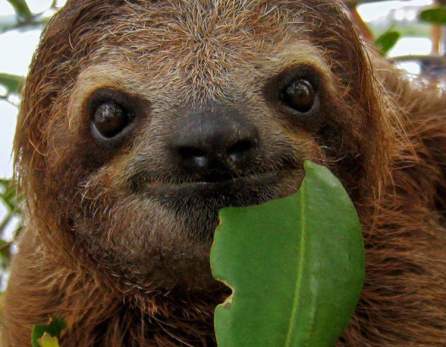 The more I study the sloth the more I kind of of feel sorry for this fella. It seems the sloth is no threat to anyone. He lives by a code of “Do No Harm”. He just wants to live a peaceful life in the trees and eat leaves, even poisonous leaves! Can you believe poisonous leaves do him no harm? I guess you could say the sloth is a complete pacifist.

The sloth is not equipped to fight, to slow for flight, and basically try to remain unnoticed, in other words, HIDE! However, they have one problem. They have to POOP. And all a sloth wants to do is poop in peace, but predators, mainly jungle cats, see a pooping sloth as easy prey. And they are. It is estimated that possibly 50% of sloths die on the ground, and they mainly come to the ground once a week to poop!

Now I have learned the sloth is very good in trees and also water. They are great swimmers. Due to their slow metabolism, they can actually slow their heart rate and breathing to such a point they can stay underwater for as long as forty minutes! But they are horrible at moving on the ground. This is their greatest point of vulnerability.

Now this eating of poisonous leaves and the once a week pooping thing actually is pretty interesting and you could say interrelated. Would you believe they are able to eat these leaves because they are so slow! The beauty of slow? Speed kills? The sloth can eat poisonous leaves and not be harmed because they have such a low rate of metabolism it takes a month for them to digest a single leaf! A month!

They have a very sophisticated digestive system, allowing them to live on very little food. Hence, one of the reasons for their slow metabolism and very slow lifestyle. We would move slow too if we were living on so little. All the sloth wants to do is eat leaves, have a baby once in a while, hang out in trees, be left alone, and poop! Is that asking to much? In a world of predators it certainly is.

I had an interesting conversation with my friend Jason, when we were having church at a Tea/ Coffee shop. We were talking about the “Border Wall”. Would Jesus build a wall? Would Jesus put a lock on the front door of his house? If someone broke into his house to steal his flat screen TV, would Jesus fight to stop him? Hhmmm. Scripture would seem to indicate he would not.

Like the sloth I don’t want to fight anyone. I just want to hang out in my tree, eat some leaves, (maybe not poisonous), or a cookie, and poop without someone attacking me! Here’s the deal. Because of their very slow metabolism, which is one of their gifts, the sloth really eats very little. They don’t eat much. They don’t NEED much. Most animals cannot even survive on these leaves, but the sloth can. Also, due to these unusual factors, the sloth only has to poop one time a week! But they make a slow journey back to that same spot every time! It’s always at the bottom of the same tree. Which puts them on the ground where they are most vulnerable, and we can also say the most “exposed”, if you know what I mean.

Can you imagine at the speed a sloth moves, and if he poops in the same place every time, then I would think he spends his whole life making trips back and forth to the bathroom! I mean, if you move that slow, then you could only get so far out from the bathroom before turning back around to begin your journey back. Right?

I’ve always been a simple man with a simple plan. I just want to live and let live. I want to be fair with people. I want to have enough, but I’m not looking to be rich. I live in a world of predators who want to be rich no matter what it cost others. And I know I have been taken advantage of many times in the years of my life. I bought a cheap house but spent way too much in interest, and still trying to pay it off. If I had been more wary of worldly ways, I would have known, but pardon me for trusting.

When I worked as a truck driver, I paid every month for health insurance that when I finally needed it, at age 58, for back surgery, it left me with a huge bill. Was it the doctors, the hospital, the insurance? How did I end up still owing so much money when I paid for coverage all these years? And at a time I could no longer earn as much? I also was denied workman’s comp. My company sent me to a doctor of their choosing who said my back problem was simply the result of growing older. The back breaking work I did for the company was not the cause. I was going to need a lawyer if I wanted to fight this. But it’s simply not my way. Frankly, knowing how this world works, I had no desire to sink to their level, and I flowed on. Just let me poop in peace, please.

Now as to the conversation Jason and I were having about the wall. I suggested, the moment we decide we want to have “stuff”, we make a choice not to be a pacifist, because if you have “stuff”, then their are predators who want your “stuff” if they can get it. So you have to put a lock on your door. You have to build a wall. You have to be willing to fight. You have to become a predator too, or let others come in and take your stuff.

Even now illegal  aliens are getting a whole lot of our stuff. Our country is so far in debt we cannot afford a good national healthcare system like some other countries, and yet we are bleeding money in many other ways because of debt, and people taking advantage who are not even Americans. We can’t take care of our own due to thieves and the high price of money hungry people. Why does medicine have to cost so much for an American? Americans suffering because they can’t afford what is cheap in other places. And what can we do about it? We are easy prey all day long.

News has reported over 4 Billion dollars being lost to illegal aliens claiming lots of children, many who are not even in this country, yet they get the tax benefits of all these children they claim. IRS has been aware of this for at least ten years! They have not fixed this problem. And yet I bet if I failed to pay taxes on my very limited income, they would be all over me. What is this crazy upside down world we live in? But I’m the sloth. I’m easy prey. I guess the illegal alien is not.

So would Jesus build a wall? People want to come here because we have a lot of stuff. Even with all our debt there is still a lot of money in this country. I don’t have it. You may not have it. But it’s here. There are those who have it, and those willing to do whatever to get it. In this world of killers I have learned to live in peace. In spite of the jungle surrounding me, my garden is full of joy. They can’t get blood from a turnip as they say, and I don’t have much that other people want. I like it that way.

My simplicity is one of my gifts. I can go underwater and hold my breath for forty minutes while the world passes by. Ha! I don’t dread crossing to the other side, the fear of death, I’ve made peace with it, so this world actually has very little power over me. Like the Apostle Paul said, he had reached a spiritual place in which the only reason he was still willing to be here was so he could continue helping others, not for himself, but for others. No, Jesus would not build a wall, but Jesus didn’t have stuff either, and we do. So…? Hhmmm. No easy answers.

So many of those popular rich people and Hollywood stars who shout so loud against the wall, and yet they live in personal high security. High security they have intentionally put around themself, choose to live within, choose to pay money for, because they want it, say they need it, but I guess you and I don’t. They want to poop in safety, but what about you and I? They are not a pacifist as they may claim to be. They are only brave because their stuff is safe. They pay people to fight for them, that is not a pacifist. Just because their hand is not holding the gun, their finger did not pull the trigger, does not mean they are nonviolent. The blood is on their hands too, maybe even more so.

“Do No Harm.” These people love to say do no harm. Okay, just let someone try to take their stuff and watch how quickly the predator comes forth. Yes, if I had my choice I wish we were a world of slow eating sloths, but we are not. Still, in spite of this world, my peaceful river still flows towards a destination, and I have affected more things along the way than a wolf would think this sloth could do. I may seek to do no harm, but that does not mean I have no purpose or ambition. I plant gardens and fight jungles, in my own little way. Selah.

Yinney the Sloth who needed to Poo

The first chapter of Yinney began on January 20th, 2019. Simply go into archives and search for that date to begin the Yinney journey. Enjoy!